So, this log is a bit late. I apologize for that. I’m still hard at work with Lost Caves and have spent time adding remaining features and such. I guess because things have started to slow down, I haven’t thought of much to write about. I’ve also got other stuff outside of developing this that’s going on, such as Thanksgiving.

Anyways though, in terms of development, the game is just about at the cusp of leaving beta and hitting gold status. I still have a few small things I need to iron out, but just about everything I need is there. One of the last couple of things I needed to add were fanfare for when you open up the boss treasure chest, which gives you an orb that grants you the pick spin ability (the ability to use your pickaxe as a helicopter rotor and glide). For a while it just had you stay in place while the orb came out of the chest and was then given to you after a few seconds. I wanted to make it a bit more exciting, so I made a victory sprite for Michael where he smiles and holds his pickaxe in the air. I also used a fanfare music track from the 8-Bit Booster Pack that I bought off itch.io. The screen also fades to white, and you get a message explaining what you received. The text also explains how to use the pick-spin to glide. At some point though I want the instructions to be a bit more subtle. I don’t like outright stating something to the player that breaks the fourth wall. I had some murals that showed the pick-spin being performed, but they weren’t too clear so I removed them. What I have I think is fine though for now. The fanfare is a bit barebones, but it works I think. 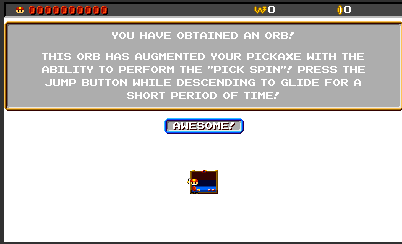 Ignore the zero wealth I have

I also spent a good deal of time working on the game’s credits. Setting up the credits scroll was pretty easy, but I wanted to take it a step further. I really liked Super Mario World’s credits because it not only credits all of the developers, but it also shows the names of every enemy afterwards. I wanted to do that too, so I have the second half of the credits sequence go to a series of rooms that shows all of the enemies with their names. Afterwards, there’s a “to be continued” body of text. I plan to add more to this game after releasing it, if it gains a following, which is why I added that. 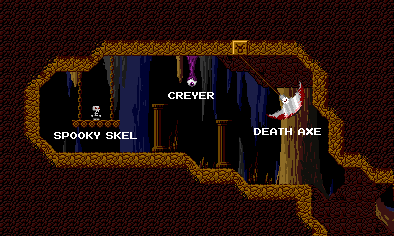 Unfortunately, in terms of contacting press, I’ve had pretty much no luck. I realized that the issue may be because I’m not sending a copy of my game with the email, so people may just not wanna go through that work of doing a back and forth with me. Totally understandably, especially with larger publications like PC Gamer. I decided to hold off on press until I have a polished build ready, and I seem to have finally hit that point. I did a run-through of the game, and fixed bugs as I came across them. One of the major bugs I fixed was the one where dropped items like coins or hearts would sometimes go through the ground for seemingly no reason. I now have something that detects if the object is in the ground (using a sphere cast in Unity that checks for the ground layer), and if it is, the object will then continue moving upwards until it’s no longer in the ground. It could use a bit of polish, but it’s much better than what was happening before. I wish I knew what was causing the bug in the first place, though.

I also found a bunch of game-breaking glitches regarding the boss, which I’m still not showing. Some were pretty hard to figure out, but pretty much all of them I either fixed, or found some workaround to avoid the glitch from happening altogether. The boss is also way easier than it was originally, giving the player a lot more crutches and breathing room. If it’s too easy, then that’s fine. I plan to add more content anyways that would be more difficult, so having this boss be relatively easy isn’t a bad thing.

Anyways, now that the game is pretty polished, I’m gonna make some more fixes, and then make a build for press to play. I may just put it on Steam but not make it readily available until the release date, and just use it to give Steam keys to press. Anyways, bottom line its that things are looking good for releasing the game this month!