So, like I said last week, I sent out copies of Lost Caves to a few people to test and give feedback, and I got my responses back today. The general consensus? The game is way too hard. Like, pretty much all across the board, people thought the game went way too high in terms of difficulty too quickly. What seems to have made the game so difficult was specifically the lack of consistent health pickups. This was something that I myself actually noticed during my multiple playthrus of the game. As a result, I added heart vases next to checkpoint altars in an effort to try and make things a bit more bearable, but it seems like that wasn’t quite enough. According to one of the testers, Level 3 is the most difficult in that regard, so I’ll have to spend some time nerfing parts of it, and making health pickups more frequent

Thankfully, the high difficulty seems to be the biggest issue, which is thankfully a relatively simple fix. I’d rather the game’s beta be too hard than too easy, because it’s much easier to make a hard game easier, than it is to make an easy game harder, because if a game is too hard, you really just have to remove or nerf whatever is making it so hard, whereas with something that’s too easy, you have to do some actual re-designing of some of the parts to make it more difficult.

Honestly, when sending out these beta copies, my biggest concern was that people would find treasure collecting to be very boring after a while, and get repetitive. That’s a core gameplay mechanic, so if that was a general weakness of the game, then that would be bad. Thankfully it seemed to be a strength. One of the testers really enjoyed finding the secrets and collecting the treasure, and thought it felt satisfying. The game is just really unforgiving, and checkpoints are too sparse. 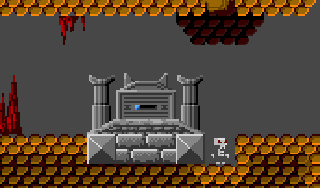 Need more of these checkpoints, and more health pickups.

One thing I may do to make health a bit easier to replenish is to have enemies have a higher chance to drop health if your health is particularly low. I also may have checkpoint altars refill at least some of your health so that you aren't stuck at 1 or 2 units of health. I'll have to do some experimenting with that.

The game’s boss is also a bit of a weakness. As a whole, it doesn’t seem too bad. According to one of my testers though, it was just way too hard, and the intro cutscene being unskippable was an issue for him. In general, I’m probably gonna make it so the boss does less damage, and that it takes less hits to damage it.

Overall, it’s really just a lot of tweaks to make the game more forgiving. I may also need to re-work a couple enemies. The beta tester I’ve been referring to also thought that the rolling wayward bear enemies (I go in-depth with these in my first devlog) should be pogo-able. That is, Michael should be able to pickaxe-pogo on them while they’re rolling, since you can actually do that on Doom Statues (the living statues that hop around). He’s right, and I think it would make those enemies a bit more “bear”able, since they’re rough for sure. The skull enemies, called Scourged Skulls, he also thought were a bit strange, and thinks that they shouldn’t be able to follow you from anywhere on the map, provided that they’re on-screen. What I’m thinking of doing is having them move around in a small area, and if you enter their line of sight, they begin to chase you.

I also have a video recording of that beta tester’s playthru, which will be invaluable for fixing specific parts of the game that were particularly frustrating. A couple other testers also have recordings, but I haven’t gotten them yet, but I’m sure they’ll be extremely helpful. The one I have is super long, though. Over 3 hours. I honestly thought the game was around 1-2 hours in length, not 3. That being said, it could be due to the repeated dying and starting over, that’ll add a lot of time for sure.

Anyways, this is a bit of a short devlog, but all-in-all, it seems that what I need to work on is simply making the game more forgiving and giving a crutch to players in some areas, and also to fix some small things to make the game feel better and not as frustrating (the hitboxes when attacking was also brought up), so this week, I’ll be working on that. Next week, I’ll let you know how progress has been for that!